skip to main | skip to sidebar

Many years ago on a vacation we were visiting The Jamestowne Settlement, a recreation of the Jamestown Fort on the James River in Virginia, the first permanent English settlement in America. The site then was not as well developed as it is now, having just past the 4ooth Anniversary of the founding of the settlement, but it had a small museum, an Indian village, reconstructions of the ships that brought the settlers to found the colony, and a recreated fort. On the schedule that day of demonstrations, it said "cord making". I interpreted this to mean rope and was excited to see how this is done. At the specified time we headed down to the area inside the fort and I looked for the large rope making apparatus that I expected to find. Nothing like that was there. Instead, sitting on the side of a path on a small bench was a woman with a basket in her lap and a small tool in her hand. I asked where the cord making demonstration would be and she smiled and said, "right here".

What she had in her hand was a lucet. She explained that is an ancient tool used for centuries to make strong, decorative cord that would be used to embellish clothing or tie things together like lace. She proceeded to move her fingers and twirl the tool around in her and as she worked - hardly looking down, a length of cord grew from the bottom of this lucet. I watched amazed. I had never seen anything like that before, and as a student of history I was fascinated. In my head I could see so many possibilities with this and this was before I had started reenacting history.

When we got home I had to find out more. At the time there was no Internet and therefore no Google to search. I went to the library and started going through historic needlework books. I looked through many until I found one that talked about the lucet or lucette. I learned more history but did not find what I wanted - a detailed photograph of an historic artifact. References led me to other sources and I found what I was looking for. 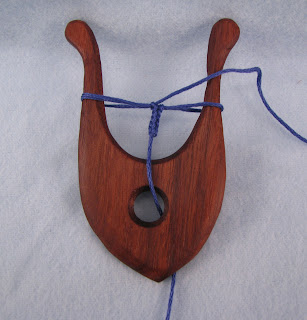 are many historic designs of lucets. My first lucet was carved from walnut. I still have and use that lucet.

Now that I had the lucet and some basic instructions on how to work it from one of the books, I got some string and tried it. It did not take long to produce cord just as the woman at Jamestown had done. Great! But what to do with that cord? I bought some floss in various colors - variegated color floss should be great as the cord would then vary in color shades. I also found a variety of metallic cords from which I could make larger, lucet cords. I started making these cords on the lucet and they looked great. The idea came to me to make earrings from the loops of cord. Setting the ends of short lengths into finding caps and then attaching ear wires, I had earrings that looked very different and attractive. I took them to work with me and they sold right away to co-workers. I took them to craft shows and they sold there too.

As I was making cord I decided to make a second lucet out of cherrywood. That one came out great too! And I still have and use that lucet. Years past and I became involved with 18th Century Living History - and saw the lucet as a way to interact with the public and talk about history. I also decided to make a few lucets and see if they would sell. While I did not figure on interest from the general public, I focused on those with an interest in history and approached one of the larger suppliers of period items to reenactors - from all periods in history. They liked the lucets very much, placed an order, and put my lucet in their catalog - as well their as bringing it to sell at living history events. They continue to order them form me and resupply their inventory.

Some time later I decided to add the lucets to my Etsy shop to see if they would sell there to the crafting and general public. I had the first lucets for sale on Etsy. They started selling and I added lucets in different American hardwoods - each designed and hand-carved as my original, historically accurate reproduction.

The lucet is easy to use and when I started offering them for sale I wrote a small booklet with photos to show exactly how to use them. Most of my lucets come with this booklet and those that do include illustrated instructions with all of the necessary steps. Anyone can learn to use the lucet within ten or fifteen minutes of following the diagrams and the text and once you know how to do it you will always be able to do it.

The cord may be used to make jewelry - like the earrings that I made or bracelets or necklaces. Multiple cords make great belts. The cord is strong and can be used to make laces for shoes or for clothing. It is truly unique. 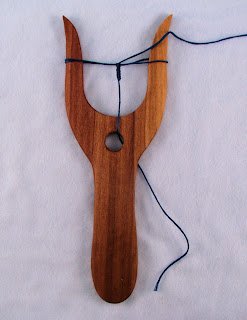 In the past year I decided to add another style lucet to my offerings. Some lucet have handles and while I prefer the smaller lucet that just fits in the hand, some do prefer a lucet with a handle to hold and turn while working. The handle lucet that I designed is historically correct in design but is not a reproduction of an ancient lucet. It is still appropriate for living history events. It works exactly the same way, though it is held in the hand by the handle. I make this lucet of thicker wood with a larger eye to allow much larger cords to work with this lucet - while still being perfect for the thinnest fiber. I make most of my handle lucets from poplar wood. It has a remarkable grain pattern and coloring that will vary uniquely from piece to piece.

All of my lucets are for sale and may be found here at my Etsy Shop - Q Branch Ltd. It is definitely unique. No two lucets of mine are ever exactly the same - the wood alone, plus the hand-carving makes each one of a kind. Many have never seen a lucet before. The cord that one can make has a million creative possibilities. Come over to the shop and see what great ones are there now.
at 5:59 PM

We are a husband and wife team who create traditional and fine craft. We have won both local and national awards and our work has been gallery exhibited. Our work sells at craft shows and on-line at several shops including those listed on this page.

Visit my virtual Office on LivePerson

PLEASE BE SURE TO VISIT

Project Wonderful Ads!
DON'T BE OUTBID -
THERE ARE MORE AD SPACES BELOW!